To set up this activity I drew black lines across the paper and then started 5 different patterns. Caden(5) used the dot paints to continue the patterns. He also had 2 blank rows at the bottom to create his own patterns. This was pretty easy for him(except for the 4th one down). 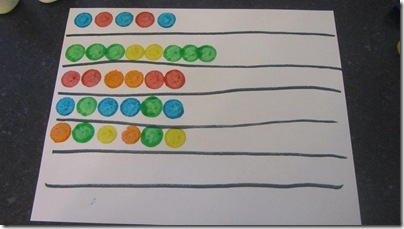 After he completed the patterns we talked about the core of the pattern(the part that repeats). He circled the core in each pattern. The 4th one down was hard for him so that is why it is circled several times: to help him understand the concept of a core repeating. The very last one was started by him and he said, “This one is for you to do and it is really tricky!” So I finished it and he was very impressed with me 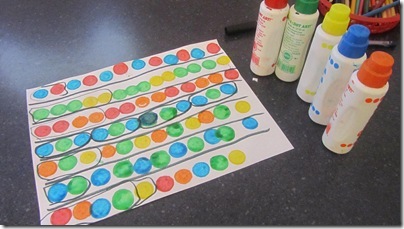 This activity could be simplified by just using AB patterns and changing up the colors only.

Posted by Packer Family at 1:47 PM