I've been wondering why Caden hasn't been very interested in blocks. I'm writing this post in case there are any other Moms wondering why their kids aren't jumping right in to blocks. When I was a preschool teacher I was always amazed at how much the kids(mostly boys) would get so into their block play. However, when I get out blocks with Caden he looses interest after 3 seconds. I've bought him mega blocks, small wooden blocks, and big foam blocks. None of them seemed to hold his attention. So I have a plan...

The first step began yesterday, I started with the little wooden blocks. I removed all of the blocks from the basket leaving only the squares and rectangles. I did this in hopes that it would make things less complicated.

Second, I sat down with Caden and showed him how to line them up in a row. I then took one of his cars and drove it down the "road".

This morning Caden got the blocks out on his own and made a "road" to drive his cars down. I was very pleased. I'm going to wait a couple of days to see if his play evolves on it own. If not I will sit down with him again and try to introduce some new ideas. Once he gets more involved with block play I will introduce more shapes. 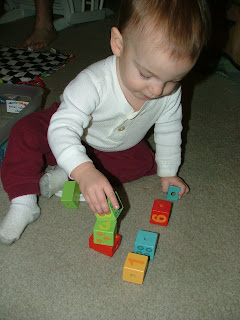 Posted by Packer Family at 7:20 PM