An Addition to the Busy Book family: Bitty Busy Book

Tutorial
Two Sundays ago we were sitting in church and Caden had finished looking at his Big Busy Book! I put it on the seat next to me and Drake picked it up. I haven't really used it with him because I really made it with Caden in mind. I watched him fumble around with the big book and decided that he needed one that was more his size. I watched as he played and kept note of all of the things he liked and the things he passed by without a care. And so the Bitty Busy Book was born. I used it today in church and It kept Drake happy and engaged for the whole hour! He actually cried when I had to take it away so he could go to Nursery class.
P.S. I bought the lock and calculator from the dollar store but everything else was left overs and re-purposed old clothes. You would be surprised what you can make from left over scraps!
Cover:
I used Steam to Seam to put the letters on the cover and then hand sewed the buttons to add some texture. When Drake first saw it he stared at it and touched each of the buttons. 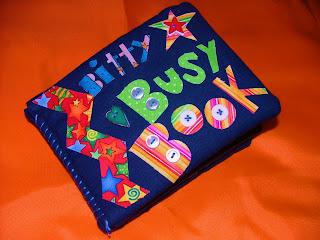 Lock and Key:
In the Big Book Drake loved the keys in the pocket so I made this activity. I built the pages with the intent for them to be interesting but still present a challenge. Drake loves to try to put the key in the lock but that is as far as he goes. As he becomes more skilled he will unlock it and try to lock it onto the middle ring. 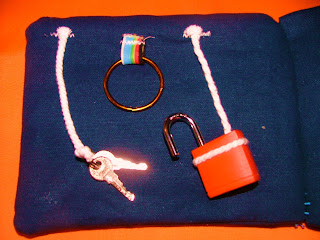 Magnet Maze:
I used some mesh material from my dad's old scrubs pocket and slipped a ball bearing behind it. I sewed two lines so that it was like a very simple maze. I sewed a very strong little magnet into the pouch and attached it to a rope. I used fabric markers to draw the blue and red dots. Caden really enjoyed the maze aspect but Drake was more interested in trying the magnet out on different things. I anticipated that which is why I put it adjacent to the Lock and Key page, so that there would be some metal to try it out on. 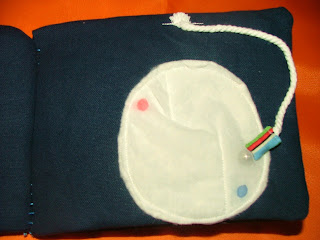 Buckles:
Drake is very in to buckles! He can't undo them yet but he loves to buckle them! Half an hour was spent buckling them and then looking at me to unbuckle them again. 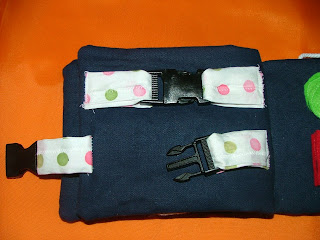 Shapes and Color Matching:
Drake played with this for about a minute but it wasn't to big of a hit. I mostly put it in because of the educational value. 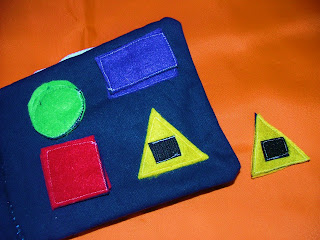 Wallet:
This was Drake other favorite. The flap has to snaps holding it shut and the green fabric at the bottom holds a click pen with the ink removed. 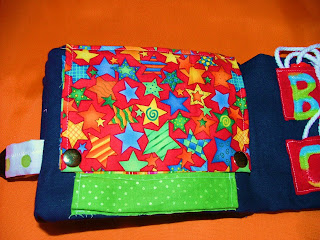 When opened there are pockets for laminated play money and credit cards. A zipper pocket with play coins and a little flip calculator that I got at the dollar store 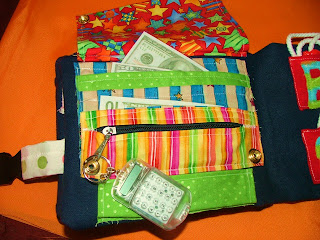 Letter Pockets:
These are four little pockets with a letter on the front of each one and the beads attached to rope are for sorting into the pockets. 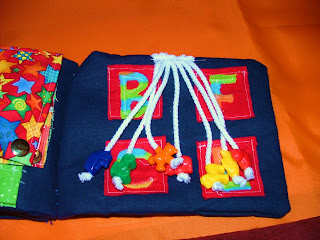 Leave a comment if you have any specific questions about how to do something.
Posted by Packer Family at 8:18 PM