We started the day by going to feed some near by horses in the neigbohood to feed them carrots and apples! All of the kids really enjoyed this. 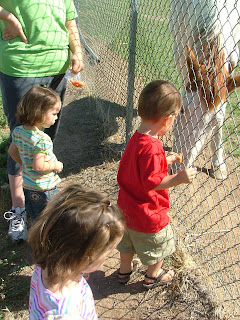 Next we walked over to our weekly group play date at the park. If you don't have any play group to go to just do what I did. I put a message out on face book saying what day and time I go to the park every week and said if anyone wanted to join me it would be great! Now we have a lot of people coming every week! 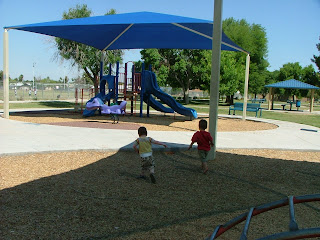 After the kids came home and took their naps they woke up to a delicious lunch. I just tossed a little of what ever I had in the fridge into a bowl:) 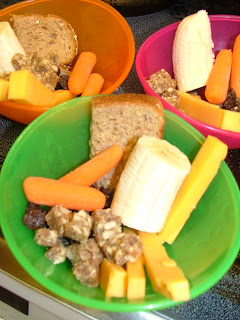 I didn't get a picture of Circle Time but Misty (my older sister) did a great job! She sang Five little monkeys jumping on the bed, Flea Fly, and 10 little Indians. She did The Number Rock by Greg and Steve on CD and then read the first three pages of Over in the Garden. Circle was shorter then we would like but it was a very new concept to all of them and so we thought it best. The picture below is how we set up Circle Time. We used pillows for them to sit on so that they would understand where to sit. We plan on buying some little carpets at the dollar store for them to sit on but pillows will work for now:) 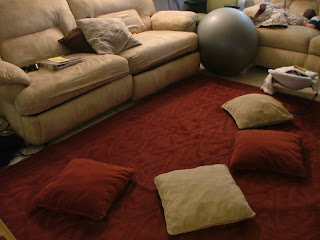 I prepared these papers before hand. I cut construction paper into three parts and then drew lines to make three boxes with the numbers and then wrote the numbers 1, 2, and 3. 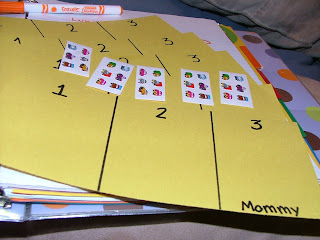 I started the lesson by taking my own paper and showing the children the numbers on the paper. I then used the little Cats and counted them out in each box. I was really amazed at how all of the kids were so intrigued with my demonstration. I then held up the papers one at a time and had them guess whose name was on the paper as I handed them out. I then gave them each six cats to practice with on their own paper. 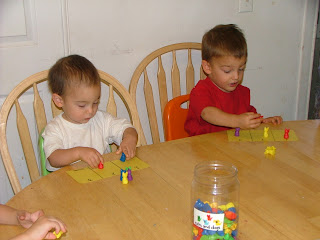 I was really surprised at how interested Drake was in this activity! He wanted to do it just like the "Big Kids". He didn't count them but he sure looked cute putting them all on his paper:) 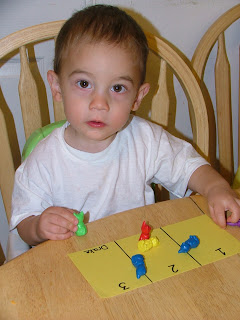 After they were done practicing I gave them each a sheet of stickers to try it with. 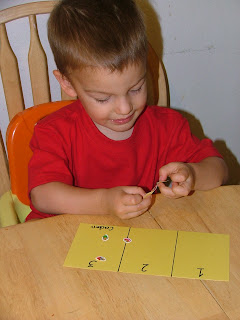 I don't have a picture but I rolled a ball to each other kids one at time and asked them what they were going to play with out side. They all said, "Play in the yard". It was too cute. I'm sure they will get the concept better soon. After they told me what they wanted to do they rolled the ball back and went to play. It was great to get outside with them in the front yard but it was HOT! We went inside and finished our day with a water break and a little WORD WORLD(PBS Show). 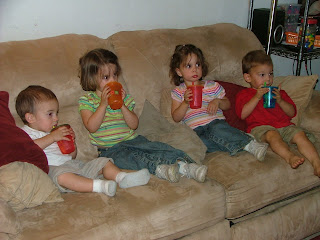 Posted by Packer Family at 8:11 PM