Look what Caden built!!! With no prompting from me he got out his blocks and cars and built this!!! I know it doesn't seem like a big deal but I have big dream of block structures covering the floor and Caden and Drake lost in play! *sigh* 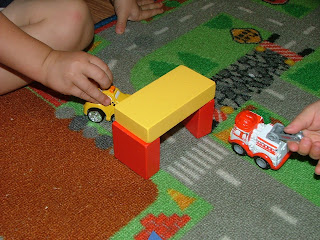 After he got bored with his tunnel/bridge(you can see it abandoned in the background) I asked if he wanted me to build a bigger one. Below is what I made and when I tried to drive a car under it my hand wouldn't fit. Caden said, "Oh Mama, train cars!". He then lined up his cars and used the back ones to push the front car through! I was very impressed with his problem solving! 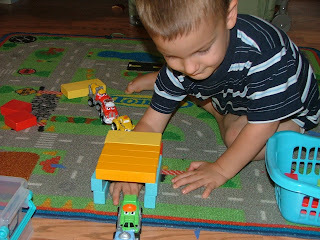 This next picture is an example of what I learned while I was a preschool teacher at ASU West. Our class room always had blocks out that never changed. What we did change is what enhanced the block play. For instance, we would put out cars and the play would turn in to building roads and cities, dinosaurs:caves, farm animals: pens and barns, little wooden people:house. The possibilities are endless and every time we would change out the surrounding toys, the block area would be the most popular place again! In the picture Caden is making the dinosaur walk up the red "stairs" that I built:) 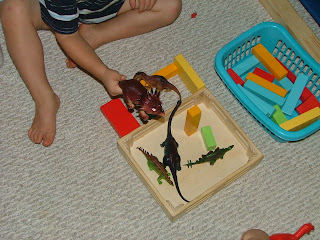