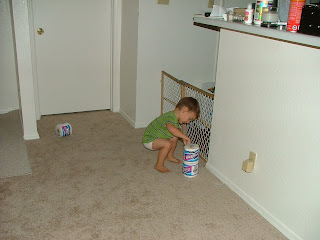 If you are like me you buy toilet paper in bulk at Costco:) Well we had just bought a very bulky bag of it and Caden had started to rip open the bag. At first I was going to have him help me put them in the cabinet(which he loves to do) but then I thought they would make fun building blocks. So we built towers and pyramids. That was fun but then the boys started knocking them over so I started tyring to build little tower really fast all over the room and they would chase after me and knock them all over. That was really fun but then Nate got home and we decided to play a defense game. One of us would build as fast as we could and the other would try and keep the boys at bay. If we were successful then we would let the boys run and knock it down. Then Nate started building towers between his legs and fending the boys off all by himself! 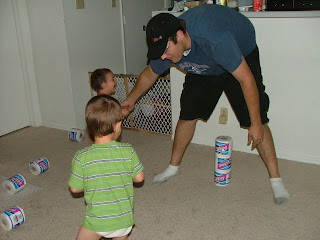 After that we just started throwing them at each other. Here's Caden bracing himself for the one coming right at him! This was SO MUCH FUN for all of us. We played for at least an hour! 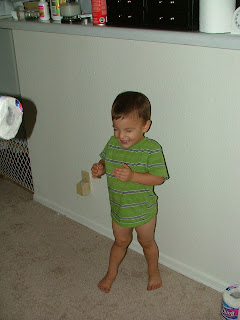 Posted by Packer Family at 7:07 PM