Caden has been choosing Jump Start Preschool for the most part this week. This is the original version not the new 3D world stuff (they all came together in a package at Costco but I don't want to introduce them till he is bored with the first game). 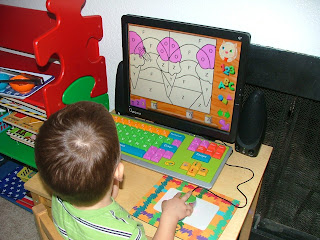 The weather has been nice so we have been venturing outside. The boys have a great time hauling rocks and pine cones around in their wagons! Caden couldn't get up this hill because he had so many rocks!! 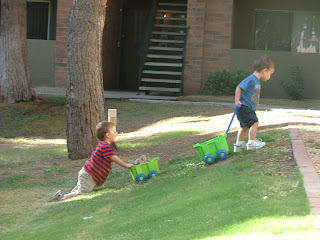 Back to basics. We have a play date in the morning and I didn't want to put out anything to busy. 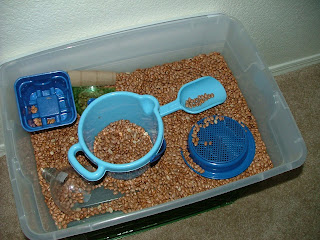 Tonka Cars, Hotwheels, Farm Clickeroos??, Small Wooden Blocks, and Big Vehicles. Like I said before we have a play date in the morning and he is a car loving boy so I pretty much put out all cars:) 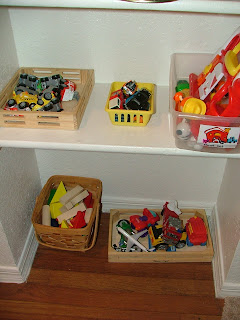 I also put out the car rug and the folding slide. They love driving cars down the slide:) 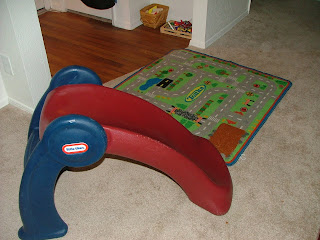 I almost put away the Random lacing things because there was very little interest but then Caden surprised me by lacing every last thing and saying, "I'm sewing like you, Mommy!" Needless to say I couldn't put them away just yet:) 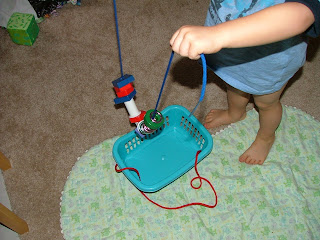 I thought I would show Jack's little area. I always have a blanket down for him so that they older boys have a visual reminder to be careful. I have a green hanging toy organizer (like the link but much bigger with six cubbies) above that store his toys, stuffed animals, and at the very top some of my mommy stuff (Pump). Against the wall are two storage baskets that I got from Ikea. I love them because they are soft. I have used wicker baskets and plastic bins for the boys before but when they started to crawl they would whap themselves in the face when they would try to get a toy, not fun:( 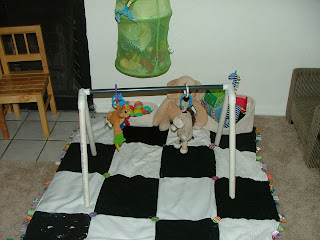 Would anyone be interested in joining my What's Out Wednesday? Just Curious:)
Posted by Packer Family at 6:00 AM