A note before I begin on this activity: I love homeschooling! But I have been so conditioned by my public school upbringing that when Caden wanted to learn to spell I thought, "He's too young for that! He shouldn't be learning that till he is in First Grade at least, right?" Says who??? I felt silly:) Caden has been trying to spell for these last few days and it is really funny! He'll see a word and make all of the rights sounds but then say a word that has nothing to do with what he just sounded out:) (C-A-T... Mama!) It really is quite funny to listen to. So I decided to make an activity for him that would help him pull together the skills he is working on.
I started by cutting 6 pieces of construction paper down to fit into page protectors. On each paper I traced a 3 letter word (sun, cat, bed, map, sad, dog) using Caden's magnetic letters(Thank You Grandma) and then drew a picture of the word above it. I put them all together with binder rings and collected all of the letters needed to spell the words. 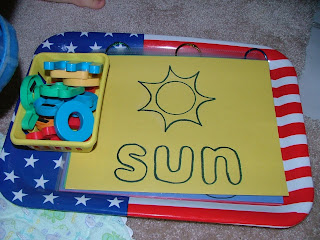 To introduce the activity I asked Caden if he would like to see me do a new activity? He said, "No Thank You, Mommy". That is fine with me because in two minutes I know he will come ask to see it, and he did:) I took the tray down to the floor, I chose a word, I pointed to each letter and said the names of the letters, I then looked through my basket and found the letters I needed placing them over the outlines, I pointed to each letter as I made the appropriate sound. I then blended them together as I said the word while moving my finger over the word from left to right, the last step is to point to the picture and say the word. "I'm all done, I'm going to put my letters back in the basket and put the tray on the shelf". I then tell the boys that it is there on the shelf when ever they would like to work with it. 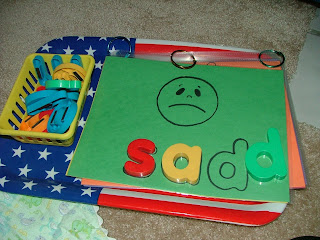 Caden worked with it right away and loved it. I was very pleased that he was enjoying it. I love providing him with things that fuel his desire to learn rather then pushing him to learn according to a state mandated time table:) 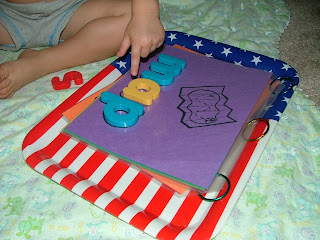 Here is a video of Caden working the word "map":