I am staying in my Dads small town home with my two boys (soon to be 3 boys). We have a little front yard but you are not aloud to leave anything in the front yard so I have to find ways to make it fun to play outside but keep in mind that I have to bring it all back in! So here is one idea: CHALK!! I know, it sounds simple but here is a really fun game to play that gets kids moving and learning:) 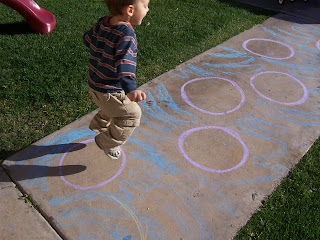 This game started out as a way get Caden jumping. I drew circles down the path and then used the blue chalk on it's side to make "water". I got Caden excited by telling him that there were monsters in the water and not to touch it! He was very excited!(If your child would be scared by that then think of something nicer like "Don't step on the fish" or something) I started by demonstrating how to jump from circle to circle adding drama by "stumbling" into the "water" and getting out really fast! When it was his turn he did it about 10 times back and forth and then lost interest. Drake didn't understand the game but he gave it a couple of runs anyway just to join in:) And, yes, he's not wearing any pants! He wouldn't let me put them on him so... He's such a cutie! 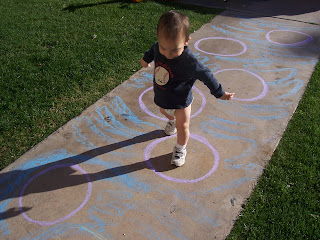 While Caden started playing something else I wrote the first 6 letters of the alphabet in each of the circles and showed it to Caden. He loved jumping in the circles and shouting the letters as he jumped! If I wasn't 31 weeks pregnant I would have drawn the whole alphabet around the sidewalk. Maybe another time:) 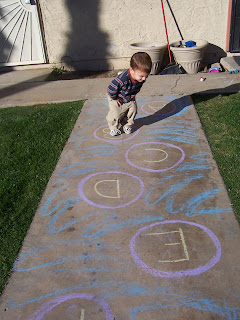 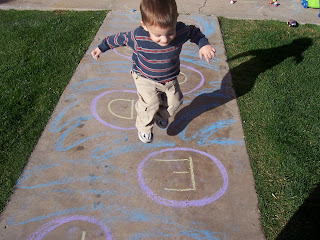 A variation of this game is using shapes drawn in different colors. Draw 5 or six shapes in the same pattern as the circles above. Then say things like "Run to the red square!" "Jump on the Yellow Triangle" "Sit on the Blue circle". It's a great way to practice shapes, colors, following directions, and coordination!
Another variation for a younger child who can't jump well yet could be drawing a winding path and have them try to walk the path without falling into the "water".
More outdoor activities for Moms with small spaces coming soon!
Posted by Packer Family at 11:21 AM