Caden has been playing with this Connect Four game since he was about 18 months and now Drake loves it too, so I thought it was time to show them how to use it together. We sorted out the checkers so that Caden had red and Drake had black. They took turns at first each placing one in at a time and then it turned into them just filling it up together. I really like pulling out simple activities that get them working together cooperatively. It gives them practice and opens their minds to the idea that they can play together and enjoy it! 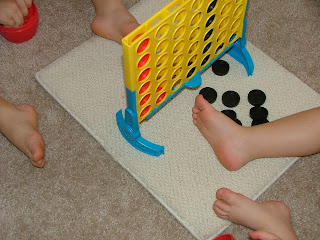 After Drake lost interest it turned into a sorting activity for Caden. He would fill it up and then dump it. Then he would sort the black from the red and start all over. It's out on the shelf now and it is very popular but they haven't worked on it together on their own yet. 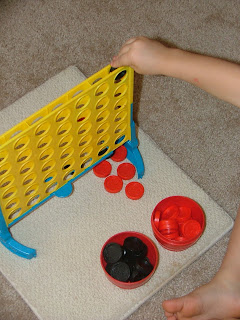