This was kind of Caden's idea. He loves these rocks I got from the dollar store. He wants to use them for everything and he said he wanted to make letters so I drew out his name and he went to work. I also drew out a D for Drake and enjoyed trying to place them on the line. I liked this because it was so simple and easy and another way to practice letters and recognizing his name. He's holding his little cup of rocks in the piturure and i didn't get a sholt of his name completed. I think this would be fun at snack time with raisins, cherrios, or any other small snack food:) 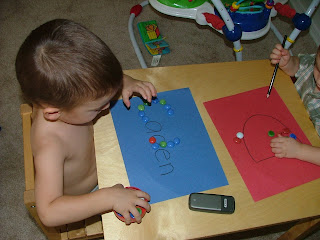