Caden Loves Memory!! I love it too and it's so fun to play with him. It's the first game where he really understands the rules and takes turns. He will even play it by himself sometimes so I made the board for him so that he can set it up easily. It's just a white piece of cardboard form a box. I used a pencil to trace the cards and then went over it with an orange sharpie:) 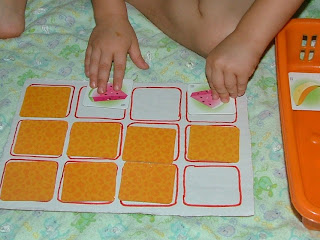 Drake is NOT good at the game of memory but he loves the cards so I cut a slit in the plastic lid of this can and he busied himself stuffing all of the cards in there. I sat with him after he had played alone for a little while and started naming pictures as he put them in and I also pointed out "Different" and "Same". 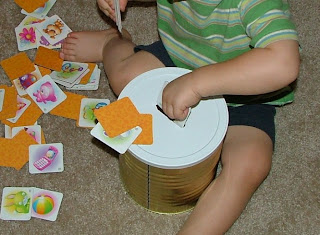